When someone ask me to introduce a book that explains Buddhism's core teachings, I often point to Steve Hagen's 'Buddhism Plain and Simple'. 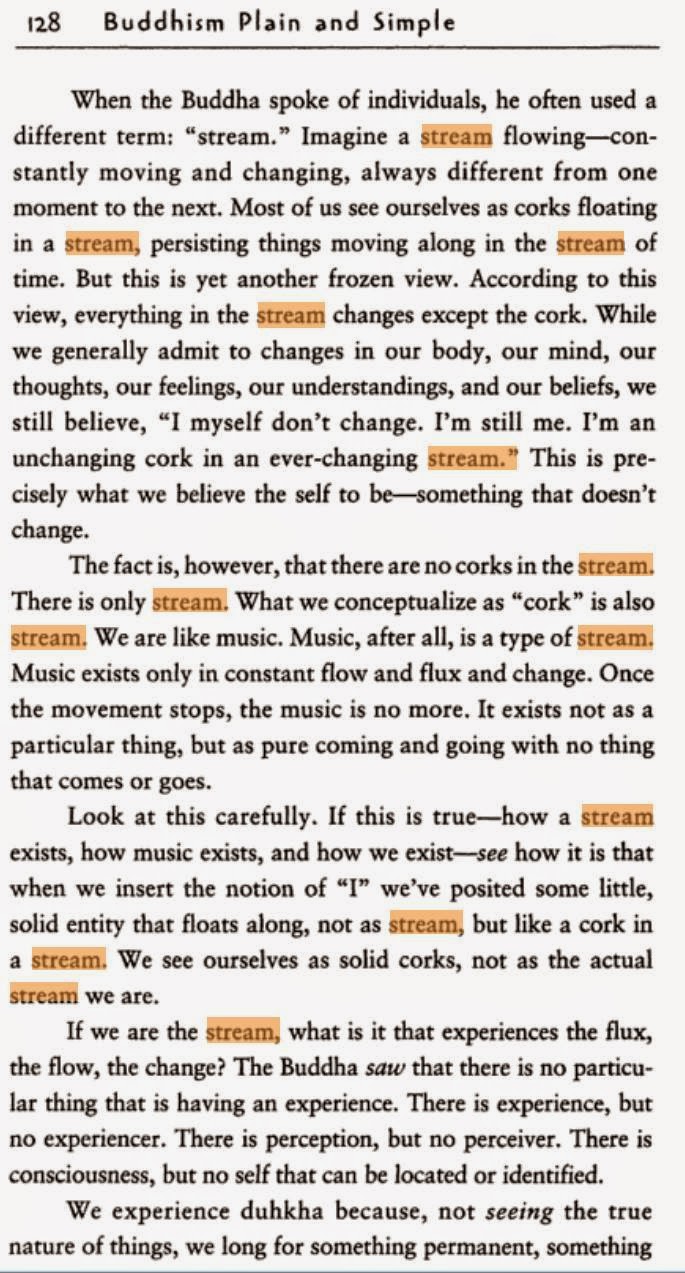 Albert Hong, Sigurður Jónas Eysteinsson, Laya Jakubowicz and 21 others like this.
Szymon Wójcik yep, this book is profoundly clear
June 7 at 6:35pm · Unlike · 2
David Boulter It's a great book, one that I always recommend to others if they ask for an introduction to the dharma (I recommended it to someone on another group just yesterday). I first read it about twelve years ago and regularly dip into it.
June 7 at 6:36pm · Unlike · 2
Sara Isayama I always preferred "Buddhism from Within" By Rev. Dazui MacPhillamy
June 7 at 6:44pm · Like
Stuart Mackinnon Fab book
June 7 at 7:43pm · Like · 1
Soh p.s. just saw that Thusness posted a koan in 2006 related to the nature of stream:

"Consciousness is/are states and mind is a flowing stream. However is there a direction of flow and does the movement take place in space?"
June 8 at 12:37am · Like · 6
Piotr Ludwinski This one about Maha is great: "To understand the nature of willed action and how it binds us to duhkha, we must first look at the nature of action, or motion, in general. If I throw a ball, it will continue to move at the same speed and in the same direction I threw it, without stopping or changing course, unless it’s acted upon by some other force. This would be obvious if we were in outer space. On earth, of course, the ball would just fall to the ground and roll to a stop. This is because the ball is being acted upon by the force of gravity. This is just simple physics.

When we see the ball bounce and roll to a stop, however, we tend to think the action is over. But only the ball has stopped. The action we took doesn’t stop at all. When the ball hit the ground it jostled the soil and the grass and it converted its energy of motion to heat. Even though the ball comes to rest, the energy that once moved it is still here; it’s been converted into heat and dispersed. It will continue to disperse, but it won’t disappear.

But here’s where it gets critical. We might think that by tossing a ball we initiate an action, but this is merely an arbitrary point in a beginningless line of action. It’s important to understand that a line of action, or movement, or energy that momentarily manifests as, for example a ball being thrown, has no discernible beginning. What is discernible is when intention steps into a line of action. To the awakened, this qualitatively changes the picture, and the change is total. It’s the difference between freedom and bondage as defined by the Buddha. Simply put, willed action is radically different than unwilled, or natural action."
June 8 at 12:45am · Unlike · 5
David Vardy A myriad bubbles were floating on the surface of a stream.
'What are you?' I cried to them as they drifted by.
'I am a bubble, of course' nearly a myriad bubbles answered,
and there was surprise and indignation in their voices as they passed.
But, here and there, a lonely bubble answered,
'We are this stream', and there was neither surprise nor indignation in their voices,
but just a quiet certitude.