Anatta is Truly a Seal

"Anatta is truly a seal." -- could anyone explain this in more detail for me? Many thanks.
LikeLike ·

Meaning its our habitual ignorance that assumes the subject/object duality onto perception.

When the assumption of an enduring, independently existent entity is seen to be merely a convention on the basis of moving/shifting skandhas. 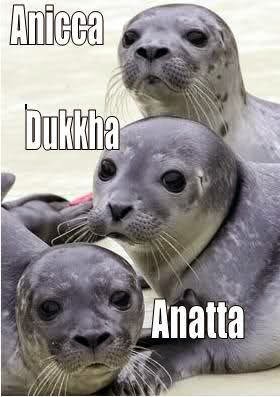 In how to attain they mention having firm conviction. Why? as this is necessary to practice against all adverseness. Are you going to practice compassion if you have doubt about the final goal. Yes it is interesting have a coffee, chat impermanence, go to a group hit it off with one, discuss the nature of not self… Then something bad happens, all you Sunday morning coffee chat evaporates in the heat of extreme emotion. What do they teach in Lam Rim, ‘even for the sake of maintaining there good name they will take life’. Crushed between the preservation of self or the teaching which way will you go….

So the experience of emptiness as a satorie like experience removes all miscomprehensions as to what Buddha was trying to teach. Now the sky is truly blue, water is truly wet and the ground is truly hard, not just because someone tells your so. Recognising the non-existence of a resplendent self what are you going to defend…

You have had a seal placed on your understanding that can never be removed.
February 25 at 8:06am · Edited · Like
Soh http://awakeningtoreality.blogspot.com.au/2008/01/ajahn-amaro-on-non-duality-and.html

At first 'effort' to focus on experiencing on the vividness of 'sensation' in the most immediate and direct way will remain. It will be 'concentrative' for some time before it turns effortless.

1. Insight that 'anatta' is a seal and not a stage must arise to further progress into the 'effortless' mode. That is, anatta is the ground of all experiences and has always been so, no I. In seeing, always only seen, in hearing always only sound and in thinking, always only thoughts. No effort required and never was there an 'I'.

2. It is better not to treat sensation as 'real' as the word 'real' in Buddhism carries a different meaning. It is rather a moment of vivid, luminous presence but nothing 'real'. It may be difficult to realise why is this important but it will become clearer in later phase of our progress.

3. Do go further into the aspect of dependent origination and emptiness to further 'purify' the experience of anatta. Not only is there no who, there is no where and when in all manifestation.

Whatever said are nothing authentic. Just a sharing and happy Journey!
Awakening to Reality: The Buddha on Non-Duality
awakeningtoreality.blogspot.com
This passage has been most useful to me personally. The challenge is to constant... See More
February 26 at 1:42pm · Like · 3 · Remove Preview
Soh If anatta is a state, then it can be entered and left, like a jhana samadhi.

If anatta is a state then there is no one to enter and no one to leave.
If it is a seal then you are referencing a I consciousness awareness.

I prefer Alberts analysis
Uggh Uggh Uggh. throw me a fish..
February 27 at 9:09pm · Like
Soh No ideas what are you saying Robert. If it is a state then it is merely an altered state of consciousness, it will come and go. Anatta is what is always the case, never can a self be pinned down within or apart from all dharmas.
February 27 at 9:14pm · Like · 1
Robert Healion If it is a state, there is no I self consciousness then you are hard put to postulate an entry or exit as there is no referencing. if it is an altered state of consciousness then it is not anatta.
February 27 at 9:16pm · Like
Robert Healion No I will retract. the altered state of consciousness is all we have as functioning individuals. however the concept of no mirror awareness, the 6ths, suggests that anatta is not a conceptual understanding. emptiness is emptiness. no second or third state.
February 27 at 9:21pm · Like
Soh If anatta is a state then you are merely talking about an experience of forgetting self. It is merely a temporary experience, the sense of self will return. Anatta is not talking about such experiences. Anatta is talking about the truth that no I can be found within or apart from every phenomena, every experience.
February 27 at 9:57pm · Like · 4
Posted by Soh at 4:08 AM